Submission deadline:  September 7, 2020     /     Submit to: jenochs@asa-hq.com
Winner will be announced at SUBExcel2021.​
Rules:  Must obviously show ASA somewhere within the sandcastle. This is for promotion of ASA.  Your entry must be free of encumbrances allowing ASA to share your entry on websites, social media, photos, communications or any other manner or medium.

April 2020
ALEXANDRIA, Va.—The American Subcontractors Association is pleased to report on a significant win for the Subcontractor community in Crosno Construction, Inc. et al v. Travelers Casualty and Surety of America. Last year, ASA produced a friend-of-the-court brief affirming a California Superior Court’s judgment regarding “pay when paid” provisions used to withhold payment from a subcontractor. On April 17, 2020, the California Court of Appeals ruled in favor of subcontractors to limit enforcement of “pay-when-paid” clauses that delay those payments to subcontractors. At issue was a 2014 Public Works Project for construction of an arsenic water treatment plant in North Edwards, California. The Subcontractor in the case was within one week of completing when a dispute arose between the Owner and Contractor and the Subcontractor was instructed to stop work. The Subcontractor subsequently made a payment bond claim for its work, but because the contract stated that the Surety “shall have reasonable time to make payment to Subcontractor” and defining that time as not less than the time the required to pursue conclusion of legal remedies against the Owner, the Surety denied the claim. The trial court held that the obligation of the bond is enforceable without reference to any contract between the contractor and the materialman.  As such, the contract’s definition of “reasonable time” was unreasonable and unenforceable because it impairs the Subcontractor’s right to timely payment under the bond. In its amicus brief, ASA encouraged the Court of Appeals to affirm the Trial Court, citing the importance of maintaining current law on mechanics’ liens, stop notices, and payment bonds in the State of California. These laws provide meaningful security for payment for all interested parties involved in public and private construction.  In this decision, the California Court of Appeals sided with ASA and the Subcontractor, ruling that a surety cannot rely on a “pay-when-paid” clause that defined “when” as after the conclusion of litigation on the contract between the owner and contractor to delay payment for undisputed work. The Court ruled that the Subcontractor is entitled to enforce payment rights and the Surety is obligated to pay surety bond claims before the conclusion of litigation between the General Contractor and Owner.

Become a Member at https://www.sfbayareasubcontractors.org/become-a-member.html
Donate to SLDF so you and your business can continue to be victorious! https://members.asaonline.com/ap/donate/qep0z4L2

January 6, 2020 marks the reconvening of California's biennial legislative session. More than 1,000 additional bills will be introduced before the end of February, and several dozen others face final votes by this month's end as they were held over from 2019.

Among the most controversial for all employers is Assembly Bill 5's "redux"...or a re-do because, as signed into law by Governor Gavin Newsom last fall, it has numerous effects on independent contractors vs. employees. It proclaims that an independent worker is really an employee deserving of benefits, wage and hours protections, and the right to unionize. Even though special carve-outs were injected into the bill at the last minute to satisfy certain groups and industries, others such as Uber, Lyft and Doordash have pledged to launch a $90,000,000(!) ballot initiative (or a new bill) to change its terms. Construction trades were excluded from AB 5, but ASAC will be watching closely as major lobbying forces will be in the halls daily; these include the Chamber of Commerce, labor, book writers and journalists, nurses, care givers, minimum wage earners, etc. In addition, lawsuits have already been started challenging the new law.

2020 promises to be problematic for other reasons. It's an election year, campaigning has begun, political action committees are being solicited for contributions, and the emerging edginess of our national standing due to the impeachment and the recent assassination of a prominent Iranian General. Legislators will be pressed for their opinions on these matters as they run for election or reelection. Most will not introduce any bill that draws opposition from constituents and which jeopardizes their chances of winning.

That said, and despite a good economy and large treasury surplus, California's housing shortage and the growing number of homeless persons will dominate the news. This means there will be at least one dozen meaty bills to address these issues, among another dozen that will go nowhere due to their terms or a legislator's lack of political "juice". And, according to the Department of Finance's "Population Division" more people left California than entered it, including those without visas. That's a ten-year low which cannot signal a prosperous future.

Too, the collapse and bankruptcy of the state's utility giant Pacific Gas & Electric due to wild fires spawned by poor overhead line maintenance will assuredly have the State chip in some relief for tens of thousands of residents whose homes and entire towns have been burnt to the ground. Shareholders and Wall Street are also gloomy about the financial hit they'll take.

Two bills that ASAC supported were signed into law and merit discussion: Assembly Bill 456: The law prescribes various requirements regarding the formation, content, and enforcement of state and local public contracts. It provided (until January 1, 2020) that contracts entered into on or after January 1, 2017 include a claim resolution process for any claim by a contractor in connection with a public works project against a public entity. It defines a claim for these purposes as a separate demand by the contractor for one or more of the following: a time extension for relief from damages or penalties for delay, payment of money or damages arising from work done pursuant to the contract for a public work, or payment of an amount disputed by the public entity. This bill extends the operation of this claim resolution process until January 1, 2027.

And, Senate Bill 197: Existing law prohibited the CA Department of Transportation, until January 1, 2020, from withholding retention proceeds when making progress payments for work performed by a contractor. This bill deletes the sunset of 2020, thereby making the prohibition operative indefinitely. ASAC was a strong advocate in support of the original retention bill and also SB 197.

Stay tuned for more news from Sacramento. ASAC is monitoring bills daily in your behalf.

Skip Daum
Advocate
American Subcontractors Association California (ASAC)
ARE YOU A SUBCONTRACTOR?
ASA/ASAC/BASA has something for everyone in your firm that will make them (and your firm) stronger, smarter & more successful!
​Why don't you join, and encourage your entire team to tap into a world of information that will support & protect your business?

​For Owners & Executives, Managers, Ops Managers, Project Managers, Superintendents, Foremen & Field,
as well as Support Staff; Administration, Accounting, Risk, Legal, and anyone else that is a part of and supports your business.

Click on the Become a Member tab above to join! 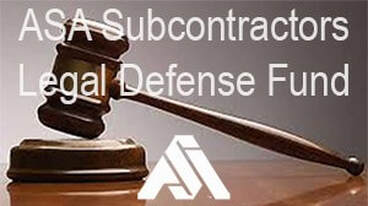 Please accept our sincere thanks for your generous donations to the Subcontractor Legal Defense Fund at SUBExcel 2020 in March.  We were pleased to hit the $20k raised mark for the Fund throughout the conference, and we obviously could not have done this without you!

As you may have seen in our ASA updates, we welcomed a
big win on a pay when paid case in California, so your funds are reaping rewards.

SLDF is a unique entity that draws cases from across the country and sets important precedent for the entire industry. Your contribution enables us to keep that work going. You can review historic and new cases along with other information on the Fund on our website at www.sldf.net.

Help Defend Our Future by Supporting the Subcontractors Legal Defense Fund
​
ASA underwrites the legal costs of filng "friend-of-the-court" briefs to inform the Court regarding the broader impact of relevant cases throughout the country. We have won dozens of these cases since 1997, vindicating subcontractor rights today and into the future!

Each year, courts across the country hand down hundreds of decisions on federal and state laws, as well as court-made or "case"law, that apply to subcontractors' businesses. Many of the decisions impacting subcontractors interpret the contract provisions of subcontract agreements—provisions like pay-if-paid, hold harmless, duty-to-defend, and no-damages-for-delay. Some of these decisions are precedent-setting and carry significance for subcontractors across state lines.

ASA's Subcontractors Legal Defense Fund supports ASA's critical legal activities in precedent-setting cases to protect the interests of all subcontractors. ASA taps the SLDF to fund amicus curiae, or  friend-of-the-court," briefs in appellate-level cases that would have a significant impact on subcontractor rights.

Any person, firm or corporation that in the normal course of business furnishes subcontract labor and/or materials to the construction industry or provides a service to such subcontractors or material suppliers is eligible for regular membership in the association

BASA, in conjunction with ASAC (ASA of California) & ASA National, offer subcontractor-tailored events and education including Members-only educational resources ranging from model contract language to risk management and marketing tools. We also offer in-person and distance-learning educational events – open to members, some free and some for greatly reduced fee. Some events that have additional option for non-members to attend - at a higher fee.

BASA is working hard to offer a balanced calendar of events that serves as educational and social – to provide connection between like-minded individuals and companies that stimulate the subcontractor’s, supplier’s and contractor’s business community. Easy technology formats also link our members to better serve their current needs.

The official educational journal of the American Subcontractors Association